Trinity Lutheran is blessed by the service of a dedicated, passionate group of leaders and staff members who work tirelessly on our behalf. We invite you to reach out to any of us; we are here to serve you.

Rev. Roger Schoolcraft was born in Pontiac, MI to Zeno and Helene Schoolcraft on March 9, 1942. As he grew up in Rochester when he was 10 a friend invited Roger and his brother to Sunday School and church at St. John’s Lutheran. He attended the Christian Day School in 6th, 7th, and 8th grade. He then attended high school and junior college at St. Paul’s in Concordia, MO. Then on to the senior college and Concordia Seminary in St. Louis graduating in 1969.

His first call was to St. John’s in St. James, MO, where he met his wife Deb (Steen), and they were married in 1972. Their marriage was blessed with a daughter, Andrea (1976) (St. Louis), and a son Aaron (1984) who lives in Maryland with his wife Megan and daughter Maisie. The pastor’s next call was to start a mission in Altoona, IA (1974–78). Then Good Shepherd, Lincoln, NE 1978–1989. In 1989 he was called to St. John’s in Fayetteville, AR where he retired after 17 years in 2007. During this time Pastor Schoolcraft also served the church at large as Circuit Counselor 1996–2007; Campus Pastor at the University of Arkansas; Assistant Dean and Dean of Campus Missionary Institute for the LCMS.

In 2012 Pastor Schoolcraft was called as Intentional Interim Pastor at Trinity Lutheran, Lexington Park, MD, where he was credentialed by the LCMS. In 2014 he was called to St. John Lutheran Church and School in Winston Salem, NC. In 2016 he was called to New Hope in Chesterfield, VA. In 2017 He and Deb returned to Fayetteville. He did several pulpit supplies at various churches and supported Deb in her fight with cancer. Finally, after a 14-year battle, the Lord Jesus called her home on Feb. 25, 2021, after 48 years of marriage.

Since then, Pastor Schoolcraft is building a home in Parrish, FL to be finished this summer. He has been busy packing, sorting, and throwing after 32 years in Fayetteville, preparing for the move. Trinity is 2 ¼ hrs. from his new home. He will be living at a villa here in the villages while he serves Trinity beginning the end of April.

Pastor Blair Clark serves as the associate pastor of Trinity Lutheran Church in the areas of nurture and Christian discipleship. He shares his passion for reaching out to the community with the Gospel of Jesus Christ through small group ministry, Christian education, and member care. He completed his master of divinity degree as a 1987 graduate of Concordia Seminary, St. Louis, Missouri, after completing his undergraduate studies at St. John’s College, Winfield, Kansas, and Concordia College, Ann Arbor, Michigan, where he received a BA degree in sociology and biblical languages. Trained as a leadership coach for pastors and congregations partnered with the Lutheran Church Missouri Synod’s revitalization process through the Transforming Churches Network (TCN), Pastor Blair successfully guided his previous congregation through that process. He currently employs those gifts as a member of our Trinity staff. He also continues to serve as a faculty member of the American Public University Systems of Charles Town, West Virginia, as an online instructor of religion. Pastor Blair, originally from Ft. Worth, Texas, is married to Kimberley (Kovac). Together, they were blessed to raise three children. In his spare time, you can find Pastor Blair enjoying his family, working on home projects, golfing, swimming, playing softball or water volleyball, and relaxing in his favorite vacation destination in Destin, Florida.

Jill Esposito began working with Trinity in 2002 as a part-time secretary shortly after moving to Florida from upstate New York. As Trinity grew, Jill assumed a full-time position as administrative assistant. In 2014, Trinity promoted Jill to business manager. Jill graduated in May of 2018 with a BAS in business and organizational management. Jill has two beautiful daughters and three amazing grandchildren. On April 18, 2016, she married her best friend, Francesco Esposito. Jill enjoys spending time with her family, reading, and traveling.

David Berardi is from NY originally and has been living in Florida with his wife Katrina for the past 27 years. David has three grown children Tucker, Dawson, and McKenna. Prior to working at Trinity Lutheran Church, David had been a Multimedia Specialist for the past twelve years at New Covenant United Methodist Church in The Villages, Florida. David is looking forward to using his multimedia skills to enhance Trinity's worship services online and in church. David is also a part-time professional magician and has performed on cruise ships and at many recreation centers in The Villages, Fl. David loves the Lord Jesus and is very blessed to be working at Trinity Lutheran Church!

The president will preside at all meetings of the Voters Assembly and the Church Council. He will make temporary appointments to all committees and boards for ratification of the Church Council and sign contracts and legal documents as required by the terms of our articles of incorporation.
Close

The treasurer is responsible for the entire financial system at Trinity. Included are banking relationships, maintaining an accurate general ledger, the preparation of monthly statements, and preparation of reports to the church council. Other responsibilities include preparing semi-monthly payroll and all related reports, preparing and signing all vendor checks, and preparing annual budgets. The treasurer also serves as chairman of the Finance Committee and serves on the Long-Range Planning Committee and the Endowment Committee.
Close 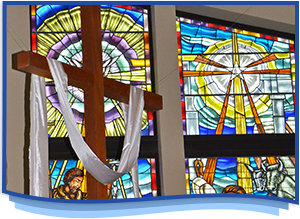